“The world breaks everyone and afterward many are strong in the broken places.  But those that will not break it kills.  It kills the very good and the very gentle and the very brave impartially.  If you are none of these you can be sure it will kill you too but there will be no special hurry.” ERNEST HEMINGWAY 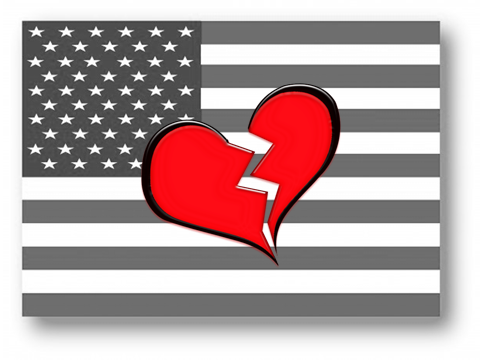 The very good and the very gentle and the very brave – let’s focus on those words.  The world system seems to despise those who have a moral compass, those who are peacemakers, those who have the courage to march to a different drummer.  Governments, religions, and financial systems do not honor a man/woman who answers their demands with “no, I will not live that way.”

We are labeled ‘unpatriotic’ if we do not toe the current disgrace posing as a legitimate government.  When we kneel in obeisance to compassion and tolerance rather than stand pledging  allegiance to the cloth symbol of a nation, we are castigated as revolutionary and disrespectful.  Well, maybe we are.  All great accomplishments in governing have been manifested by protest.  No, I cannot be silent when brothers and sisters of a different color or creed do not equally enjoy the fruits of the nation they have served in battle and embraced as home.

I will not profess the creeds of religions which deny even the most basic human understanding that all creatures are made in the image of the One whom they profess as God and Savior while simultaneously endorsing locked cages of children on our border and a war in the Gulf which threatens the citizens of Yemen with epic, catastrophic starvation.  No, I will not.

I will not participate in the corporate destruction of our sacred ecosystem for the sake of increased profits of corporations which have abdicated ecological responsibility in lieu of financial extravagance.  While much of the world’s population  lives without the basic comforts of adequate food and clean water, placating the luxuriant appetites of the privileged at the expense of the marginalized poor cannot possibly advance the survival of our species materially or spiritually.

Enough is enough.  Enough corruption, enough hatred, enough greed, enough racism, enough killing.  Where will we choose to stand as our country approaches the threshold of despotic, authoritarian leadership?  As the earth’s ecosystem is screaming “enough” where will our allegiance be placed?  The answer for each of us is within.  When that quiet voice of protest within becomes a scream reverberating throughout the universe, then, perhaps, we can be assured that we have done enough.