“Admitted we were powerless over alcohol, that our lives had become unmanageable.”

“Came to believe that a power greater than ourselves could restore us to sanity.”

“Made a decision to turn our will and our lives over to the care of God as we understood God.” 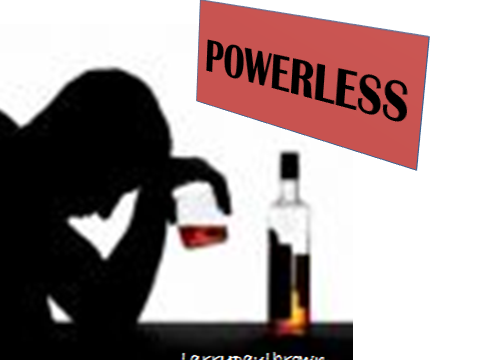 When I first inserted this graphic, I said to myself, “I can’t use it because it is too blurred.”

Really?  Doesn’t that describe who and what we were in our addictions?  A big blur.  And the word POWERLESS is clear and distinct.  Yes, sometimes the words and pictures unplanned in what we write say more than 1000 words could say.

For some of us the transition from “me in charge” to God in charge was immediate, but for many it was a slow process which had to be renewed every morning, every hour of the day.  One, two, three every day for an extended period of time finally got us to the point where “admitting, believing, and turning it over” were as instinctive as breathing or pumping blood.  How often did we think, “My life wasn’t really that unmanageable?” or, “Maybe I could just drink socially like my buddies do? ” or, “I’ll decide what I turn over to my Higher Power?”

Cunning, baffling, and powerful!  Such is the nature of our disease which will not be satisfied until we are insane or dead.  Our fellowship friends who decided to test the waters of drinking again sometimes returned to reassure us that nothing had changed “out there”.  They were the fortunate ones.  Many never returned.

A recovery is a Godsend.  It is God’s grace giving us a chance to live sober lives.  We should never, ever, assume that we will have more than one opportunity to be victorious over alcohol.  It is not guaranteed.  Not because God is unwilling, but because we are fallible, broken men and women who are powerless over alcohol.