“Ok, so I was thinking.  Back in the 600-500 B.C. era in China, good ole Lao probably didn’t have as much about which to be depressed or anxious as we do today in 2020.  The environment was just fine, the economy was thriving, the government was stable, the family was well fed, and he spent his days writing clever things while sitting in gardens filled with butterflies and hummingbirds.

Yeah, I know.  Lao Tzu was probably just a figment of China’s imagination, but the writings attributed to him in the Tao Te Ching have inspired humans for centuries.  It’s like Jesus of the New Testament.  We can’t really prove the historicity of his existence, but, haven’t the verses assigned to him enriched our worlds?

The mysteries that beguile us are probably best left to be just that – mysteries.  If we would spend less time trying to conquer and understand the complexities of the universe and more time simply enjoying moments of inspiration and joy, maybe then depression and anxiety would leave us.

….as near as the destination may be, it’s still the journey that matters….

Most of us know our kin, sometimes wish we did not.  Can we imagine a world of kinship, a place where the man who is black, the woman who is Muslim, the neighbor who is gay, the co-worker who practices Buddhism, the homeless man on the corner, the drunk in the gutter – can we somehow see each of them as kin?  Related?  Worthy of our love and compassion?

Society, governments, and religions often, inadvertently or overtly, put separations between us defining our differences thereby reducing relationships to a status of “us” and “them” in denial of the paradigm which the great wisdom leaders throughout history from Martin Luther King, Jr. to Gandhi, to Muhammad, to Jesus of Nazareth to Lao Tzu to Gautama Buddha tried to teach during their lifetimes.

Even when placing our lives in service to others, we are not recognizing God’s dream for his/her Creation – being one with the other and not separate.  Kinship is what Jesus practiced.  He was one not standing outside the circle, but in the midst of those “… whose dignity had been denied…with the poor and the powerless and the voiceless….the easily despised and the readily left out…the demonized…the disposable.”  cac.org

We, who are eternally hopeful that the time for non-violence, for peace, for kinship has arrived, read the words of one of the revered prophets of the Judaic tradition, HABAKKUK, who said, “For the revelation awaits an appointed time, it speaks of the end and will not prove false.”

“In that day the wolf and the lamb will live together, the leopard will lie down with the baby goat.  The calf and the yearling will be safe with the lion, and a little child will lead them.”  ISAIAH 11:6

It paints a beautiful picture of what life on earth could be – was intended to be.  Do you see it?  Are you willing to live it?  It’s our choice.

If you are sober today, give yourself and your Higher Power a hand.

Talk the walk, then walk the talk

After 39 years of continued sobriety celebrated today, I reflect on the secrets of sober-livng.  There are no secrets.  It is hard work, commitment to a better way of living and the support of sober friends.  However, talking the walk at the tables of Alcoholics Anonymous and then walking that talk in everyday life will guarantee a fighting chance to overcome those addictions that have become personal demons.

The fellowship of AA is ancient wisdom set to contemporary times.  Even before the teachings of Jesus of Nazareth as set forth in “The Way”, Lao Tzu and the Buddha realized a life dedicated to victorious living through abandonment of self.  The writings of Bill W. and Dr. Bob describe this dedication to selfishness and self-centeredness as “self-will run riot.”  AA BIG BOOK  The I, I, I and me, me, me  controlled all aspects of our lives, did it not?

Within my sobriety today, I cannot judge nor control other people’s talk or walk.  They obviously live with perceptions of life that differ from mine.  Therefore, when elected leaders of our government speak justice and fairness yet legislate in opposition to those pronouncements, and when preachers from the pulpit preach righteousness and morality yet conduct their personal lives in opposition to what is right and moral, I can only wonder what experiences have formed their perceptions.  Must one of us be wrong in order for the other to be right, or do we simply operate from different realms?  Returning the focus to my talk and my walk enthusiastically,  I become ever more grateful for the teachers who save us from the hells of addiction.

Abba Isidore of Pelusia
“To live without speaking is better than to speak without living.  For the former who lives rightly does good by his silence but the latter does no good even when he speaks. When words and life correspond to one another they are together the whole of philosophy.” CAC.ORG

Those who know they have enough are truly wealthy – LAO TZU

The old cliché, “the only difference between men and boys is the size (and cost) of their toys,” rings soundly as I sit on my front porch watching traffic heading to the marina to launch into the Homosassa River and the Gulf the boats being pulled.  A few are modest older model pickup trucks pulling equally modest boats, but most are sleek, brand new powerful Fords and Chevys towing a mini-yacht that could house a small family in comfort.  Certainly they are a far cry from the sandbox trucks and bathtub boats we little boys enjoyed years ago while growing up.

And I sincerely do not begrudge their showy big-boy toys.  But, I also do not understand how some of us grew up to be content with the small toys in life while others were driven to bigger, better, shinier and more powerful.  Driving 18-wheeler coast to coast and north to south during the 1990s into 2009, we encountered frequently a fellow trucker keying up on his CB radio with a harsh crackle and a booming “Breaker, breaker 19.  Anybody got a copy on this here radio-o-o-o-o.  C’mon back-k-k-k”

Undoubtedly, folks two states away had a copy on this driver’s echoing master-blaster CB radio.  It was annoying and totally worthless for anything other than a showy display of strength and power.  My driving partner, a man not known to mince words, would reply, “yeah hand, we have a copy on your radio and we’re so glad you’ve finally found a big toy to compensate for your other small equipment.”

Worked every time.  Spitting and fuming just momentarily that radio then went silent.  That usually happened; however there were times when a profanity laced, violence threatening discussion ensued about equipment size as boys and men will often do.

A healthy ego along with balanced self-esteem teach us that blessings are not dependent upon wealth or possessions.  Your toys, no matter how large or expensive, are no better than my little dinghy with oars.  What is important is the level of self-worth your toys give to you or detract from me.  Simplicity is all about mind-set and priorities.  Even more, it is about living joyously day-to-day this mystery called life and disallowing the external forces of consumerism and consumption to call the shots. 🙏

If you do not change direction,

you may end up
where you are heading – Lao Tzu

“Today consider who is not free in the place you call home.  Pray for them and then take one step toward the way you can become an answer to that prayer.”

“WHAT WE PLEDGE OUR ALLEGIANCE TO must look like Jesus:  who turned the other cheek, welcomed children, engaged the outcast, blurred lines of religion and family for the sake of his neighbor, absorbed violence, disarmed hate, moved toward the sick, included the poor, reorganized the recipients, and loved his enemies.  We can celebrate where we live without worshipping it and while challenging the parts that look nothing like Christ.”

Nature does not hurry, yet everything is accomplished – Lao Tzu

Nature is not mute.  It is man who is deaf – Terence McKenna

A walk in nature walks the soul back home – Mary Davis

And God called the dry land earth; and the gathering of the waters he called seas; and he saw that it was good – Genesis1:10

May the mother of wisdom guide us to be worthy stewards of the one global home which has been entrusted to us by the generous Creator.

May we be blessed by the forests, the sea dwellers, the land roamers, the flowers, the crops which comfort, inspire and nourish one planet, one people, one world under a canopy of universal justice and respect. 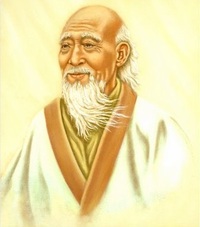 “Be content with what you have;
rejoice in the way things are.
When you realize there is nothing lacking,
the whole world belongs to you.”    Lao Tzu

Lao Tzu, a mystic philosopher of ancient China, is best known as the author of the Tao Te Ching, or simply Laozi.  He is traditionally considered the founder of Taoism (pronounced “Daoism”), was born in the 6th century BCE