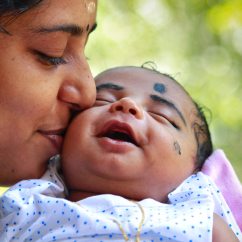 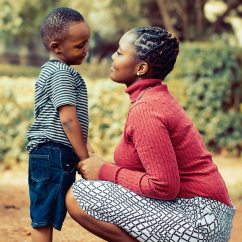 I was a mother’s child – we all were.  I was fortunate to live in a nurturing, caring home.  Often I jokingly refer to our family as the Pennsylvania Dutch version of  THE WALTONS, that wildly popular television series from decades ago.  Indeed those Waltons had nothing over my family living in a multi-generational household consisting of 2 great-grandparents, 2 aunts, 2 grandparents, my mother and me.  The menfolk in the house did not have a chance when challenged by the 5 female members.😎

I learned not to be too strident when considering religious or political issues.  Every man and woman was entitled to his/her opinion or as Grandpa always said, “opinions are like a certain body part, and everybody has one.”  Grandpa was a wise man who knew that Grandma was always right even when she was dead wrong.

We learned the Bible as youngsters and we knew many of the Jesus stories from the Gospels.  The passage on my mind today was written in the book of Mark.   Check it out in order to get the gist of Jesus’ story.  It is Mark 7:26-29. (1)

A Gentile woman approached Jesus and begged him to cast out a demon indwelling her daughter.  Jesus replied, “Let the children (the Hebrews) be fed first because it’s not right to feed the children’s food to the dogs (non-Jews).”  The woman responded by saying that even the dogs under the table eat the children’s food.  Jesus honored her faith and removed the demon.

Perhaps Jesus realized how dehumanizing the word “dogs” was when referring to Gentile children and that this was not what He nor the Father whom he professed were in this world to teach.  Coming to love, heal, and resurrect only certain mothers’ children is not what the love of Jesus and his God embodied. (2)

I was never referred to as dog, animal, illegal, alien, vermin, invader or pest when I was a child.  Children of the universal God, whether Christian, Jewish, Muslim, Buddhist, Hindu, black, brown, white, or multi-colored, are never denied  citizenship in God’s universe nor should ever they be denigrated by crass, dehumanizing labels inflicted upon them by political leaders or religious leaders.  Leaders who endorse this type of dialog are not worthy to hold positions of responsibility and should be viewed with skepticism.

When we awakened this morning, did we acknowledge the universal power which has declared that all of us, each and every one, is a child of God?  Do we accept that although we do not always understand the man or woman who stridently disagrees with our faith, our political affiliation, our lifestyle, do we accept that they also are loved by this same God?  We are all children, sometimes bratty, sometimes impish, sometimes hateful, but never dogs, animals, illegals, aliens, vermin, invaders or pests.  You and I would never label our children this way, why do it to another mother’s child?

2 Replies to “a mother’s child”